This Church is in the deanery of Chadkirk and Diocese of Chester. 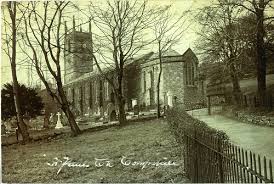 The building of the Church began in 1839 and was completed in 1841. It was consecrated on May 23rd by the Bishop of Chester. Originally the Church comprised only the Nave and Tower. Three quarters of the cost of £2000 was met by the local mill owner George Andrew and his brother Thomas. The Chancel was added in 1886. The latest extensive renovations which involved underpinning of the chancel, occurred in 2018, and was made possible with Heritage Lottery Funding.

The monuments around the Church are almost all dedicated to members of the Andrew Family. The marble monument outside the West door is that of George Andrew, “the founder and benefactor of Compstall Village”. This leaflet takes the form of a clockwise tour around the Church. We hope you enjoy your visit and will return.

1. Enter via the porch into the newly extended and refurbished Narthex, rededicated on the 7th July 2019 to Sue Gammon a Friend and Benefactor of the Church. This provides a space where the congregation can meet after services, chat over a friendly cup of tea, and can also be used by other members of the community as a useful meeting room. The name Narthex is used because in New Testament times, in a Greek Church, the antechamber of the Nave from which it is separated by columns, rails or a wall was called a Narthex. On the wall to your left you will see a diamond shaped Victorian brass plaque giving details of Samuel Rose and his service to the Church. This is a fine example of such brass work.

2. Go through the glass doors, immediately in front of you is the book of rememberance designed and constructed by Messrs Eric and Nick Green. Turn left, there you will find a monument to Ralph Sherwin a manager at the nearby Compstall Print-works and also a long serving member of the Church. This is an apt reminder of the very close links between Compstall mill workers and the life of this Church. There is a new addition of a staircase leading to the gallery, and above the stairs is a newly erected war memorial saved when the Primitive Methodist Church in Compstall was deconsecrated.

3. Travelling up the aisle you will see on the wall elaborate monuments to members of the Andrew family, whose influence both locally and in the North West was considerable. The largest monument contains the Coat of Arms of the Andrew family and their moto – SEMPER PARATUS – ‘always ready’. It is dedicated to George Andrew, second son of the founder of the Church, a magistrate for the counties of Derby and Chester, Deputy Lieutenant of the County of Derby and Lord of the Manor of Werneth.

4. The local area was originally known as Werneth and the name of the Church – St. Paul, Werneth. Today entries in the Marriage Register still read “the Parish of St. Paul, Werneth or Compstall”

5. At the top of the aisle to the left of the Vestry is the Font. This was moved to its present position in 1988 – originally it was close to the porch, symbolising Baptism as the entry into the family of the Church, as the door is the entry to the building of the Church. The plaque at the base of the Font gives detail that it was “erected to the glory of God as a Jubilee offering by the Vicar and Congregation of St. Paul’s May 23rd 1891” – this date being the 50th anniversary of the Consecration of the Church.

The Baptism Board, to the right of the Vestry door, contains names of those recently Baptised. Each Mothering Sunday, names of the children Baptised over the past year are added

7. The Chancel Arch has been recognised as an attractive feature of the Church as has also the East Window. The present Organ is an Allen Digital Computer Organ and was installed in 1997. The 1868 Wadsworth console is now in the gallery where it was originally situated when the church was built. Its original pipes remain in the Chancel and Organ chamber, and in the gallery can be seen many of the banners used in the Church.

8. On either side of the Altar are two Bishop’s Chairs whose origin is unknown. In 1936 the present Altar and Reredos in English oak, the central painting of Christ done by the Warden Mr. R.W. Bates, were dedicated by the Bishop of Chester Dr. Geoffrey Fisher, on March 22nd. The Processional Cross was presented by Mr. & Mrs. Ralph Pickford in 1964. The tiles around the Alter are Minton tiles.

9. The windows in the chancel have been attributed to the studio of William Wailes who was a student of Pugin. Some of the lancet windows are older than the Chancel and were most likely in the East Wall of the Church before the Chancel was added. One lancet window in the Chancel is dedicated to St. Paul and the other to St. John (1860) The lancet windows are notable for their fine colours. Along the south side of the main body of the Church – the Nave are windows dedicated to St. Matthew, St. Mark, St. Luke and St. James, Minor.

It is interesting to note that the word NAVE is Latin and means Ship. The connection has been suggested that as a ship makes a journey so do Christians in their lives as they seek as travellers or pilgrims to know God.

10. Before looking at more Andrew family memorials on the South wall, pause and look at the large plaque to your left when you come down the Chancel steps. It is to the glory of God and in memory of the Revd. William Henry Hopkins B.A. for 48 years Vicar of this Church. The largest monument close to this plaque gives a glowing account of the esteem in which George Andrew was held as “Founder of the Village”. Other plaques give references to wars in which members of the Andrew family fought and died. There are also four plaques towards the Warden’s Pew, dedicated to the Woodmass brothers who all died during the First World War.

11. At the back of the Church is the traditional Wardens’ Pew, which contains the Wardens’ Wands – rods of office. The wardens are lay officers of the Bishop appointed at the Annual General Meeting to assist the Minister in the work of the Parish Church. The wands are usually carried by the wardens in front of a Bishop when he takes part in a Service here. In former years one warden was known as the Peoples’ warden and one as the Vicar’s Warden. Above their pew is a monument to John Arnfield, 45 years Sunday School Teacher and Superintendent, 27 years in succession as Vicar’s Warden.

You may note that other pews bear numbers, this was because pews could be rented by families, and after a previous renovation were reinstated in a random order. You will also not that the numerical order is incorrect. This is because at some stage they were removed and replaced out of sequence.

Finally, it is interesting to note that the pews originally extended all the way to the main door, the West Door. However, as improvements have been made over the years pews have had to be removed to accommodate these.

You are most welcome at all Church Services and events; details may be found in the Parish News available in the Narthex.

St Paul’s wishes to acknowledge the support of the following for making a significant contribution to the restoration and renovation work of 2018.

All who contributed on gift days, purchased tickets for music festivals through the church or supported concerts that were held to raise funds. Thank you all.