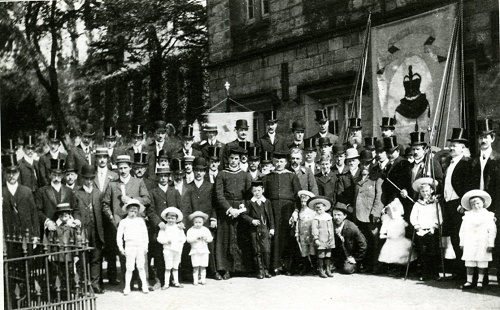 important part in the life of the early church. An account of the re-union of old scholars of the Sunday School on 2nd December 1902 gives details of the number of children who gained their Biblical teaching there.

A prize given at the Sunday School in February 1846 to Mr Peter Booth was no bigger than an ordinary pocket book, yet it was treasured. But the Vicar in 1904 wondered whether the children would be satisfied with such books. He remembered at another parish a little girl received a similar small book and commented to the gentleman who gave it, “Here, Mester, yo’ can keep that till it grows bigger.”

The foundation stone of the present Parish hall was laid in 1909 and the Sunday School which met there was opened on 30th April 1910. In 1914 a meeting there was held to discuss – “efforts to reduce the debt on the new Sunday School – it was resolved that a Bazaar be held in October 1915, but then reverted to the old scheme of a 40 weeks collection. It was understood that this would in no way interfere with the zeal of the Mothers’ Union prosecuting their customary ‘Sale of Work’ from time to time.”