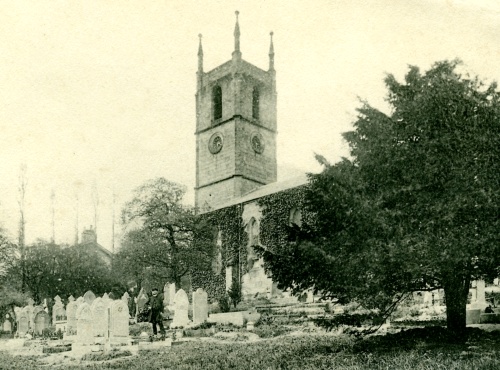 In 1839 the first work began on the building of St. Paul’s Church. Completed in 1841, it included only the nave and tower. It cost two thousand pounds, three quarters of which was provided, as one local paper described, “Through the munificence of George Andrew, founder of the village of Compstall .” Andrew was the local mill owner who partially endowed the living. He and his descendants regularly attended the church and generously supported it for many years. His brother Thomas also contributed to the original building cost with the remaining expense met by donations from villagers, Stockport Parish and Diocesan Funds. During its early years, St. Paul ‘s was a daughter church of the Parish of St. Mary Stockport.

It was on 23 rd May 1841 that St. Paul’s was consecrated by the Bishop of Chester, the Rt. Revd J B Sumner D.D. According to newspaper reports of the time, the Church was “filled to suffocation” with members of local families. George Andrew handed over the deed of endowment to the Bishop. A contemporary account gives some details of the service – “Psalm 24 was repeated as the Clergy walked around the aisles: the consecration was performed from the north side of the Lord’s Table. The Bishop preached from the text. “Ye shall find rest unto your souls” (Matthew 11, v 29): he then baptised the first-born son of Thomas Andrew of Spring Wood. After the service, the Bishop, Clergy and several invited gentlemen had dinner at Mr Andrew’s home.”

The Church building is Gothic in design. The lancet windows and Chancel arch and East Window have been recognised as attractive features. The Chancel was added in 1886. The cost of the Chancel was noted in the Parochial Church Council (PCC) minutes with reference to a meeting of the building committee 12 th July 1886 at which the estimate of Mr Samuel Robinson of £609 was accepted for the erection of the Chancel. The foundation stone was laid on 28 th August by Mrs Woodmass, a granddaughter of the first Patron, George Andrew. An advertisement for the laying of the foundation stone was inserted in the North Chester Herald and Ashton Reporter. A time capsule was made to contain four papers therein, and five coins of the realm to be deposited in the cornerstone. The Chancel was consecrated on 4 th November 1887 .

The present Altar and Reredos in English Oak was dedicated by the Bishop of Chester, Dr Geoffrey Fisher on 22 nd March 1936 . It was designed by the Vicar’s Warden, Mr R W Bates who also did the painting in the centre panel of the Reredos.

On his first visit the Bishop commented, “If Compstall always looks as attractive as this, I shall wish to come again as rapidly as possible.”

Around the walls of the church may be seen the elaborate memorials to members of the Andrew family, whose influence locally and in the North West was considerable.

A monument to Ralph Sherwin – a manager at the nearby Compstall Printworks for 45 years and also a long serving Warden of the Church for over 30 years, is a good illustration of the close links between Compstall millworkers and the life of the Church. Such a link is also reflected in the number of weavers and spinners whose names appear in the Marriage Register. In these registers it is interesting to discover that the first wedding took place at St. Paul’s on Valentine’s day in 1850. The greatest number of baptisms occurred at a service in 1855 when eleven members of one family aged between four and thirty four years were christened together.

Much of the history of a church can be found where its former congregation lies — in the churchyard. St. Paul’s is no exception. The gravestones bear witness to the family names of the village, recording an era long past as the changing tide of industry and economics eventually removed from the area the original reason for its existence. Situated to the south-west of the

Church the graveyard falls away gently to Gigg Brook. Opposite the west door of the tower is the Andrew memorial and at the south-east corner of the chancel is a memorial to a child who lived at nearby Compstall Hall.

Two World Wars, the decline of the cotton industry, the shift of population related to their work …. all have changed the face of Compstall. Long gone are the Andrew family. Gone, too, their mills. Yet the name lingers on stubbornly. On 1st September 1970 the only public house in Compstall changed its name from the Commercial Hotel to The Andrew Arms.